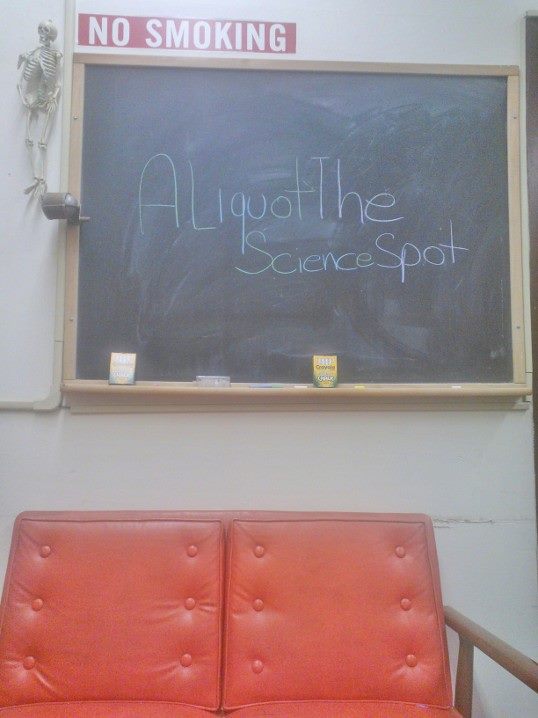 Varicella was once a common childhood disease. Due to childhood vaccination initiated in 1996 in the United States, the viral infection has already begun to fade out of common knowledge. Many young adults and adolescents today, have never experienced the itchy blistering rash, or missed days of school because of it. Some people have even begun to contest the necessity of vaccinating against the virus that causes chickenpox infections in children. However, preventing chickenpox can also prevent two painfully debilitating conditions later on in life; Shingles and Postherpetic Neuralgia. 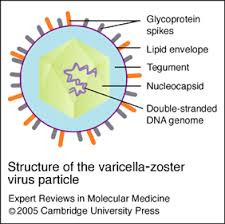 icella-Zoster Virus (VZV) is a DNA herpesvirus that infects humans and some primates.  It is the cause of both Chickenpox (Varicella disease) and Shingles (Herpes Zoster).

Chickenpox is a highly infectious childhood disease that primarily affects children between the ages of 1 and 9 years old. It causes an itchy vesicular rash to appear on the body, accompanied by fever and malaise.

Chickenpox is self-limiting, and does not require treatment to be resolved. Healthy individuals develop a mild disease that  generally clears within a few weeks. Symptoms such as dehydration, fever, and puritis, can be managed with fluid replacement, acetaminophen, and calamine lotion, respectively.

Though usually mild, chickenpox can be severe and accompanied by life threatening complications, especially in infants, adults, and the immunocompromised. Secondary bacterial infections arising from streptococci or Staphylococcus aureus can affect the skin and underlying soft tissue. More invasive infections, such as,  pneumonia, necrotising fasciitis, and sepsis, increase risk of fatality. Additionally, central nervous system manifestations such as, cerebellar ataxia, meningitis, and encephalitis can occur. Vasculitis of the large and small blood vessels may result in stroke and hemorrhages.

In Addition, severe chickenpox can happen when infection occurs in adulthood, and when the immune system is compromised. Acquiring chickenpox during adulthood carries a significantly increased risk of death.

The varicella-zoster virus enters the host through inhalation into the respiratory tract, by contact with the mucosal membranes of the mouth, throat, and nose. Once there, it spreads from cell-to-cell; replicating within the nucleus of infected cells. It multiplies within the lymph nodes before disseminating throughout the organs of body, and further multiplying in the connective tissues found around them. After incubating for approximately 2 weeks VCV is communicable, being most contagious 1 to 2 days before the rash appears. During this time it is spread by droplets of fluid from the nose and mouth through sneezing or coughing. Once the rash erupts, virus can be spread directly from the skin lesions for another 5 to 7 days.

After recovery, the infected person will have immunity against developing chickenpox again (unless severely immunocompromised). However, the virus stays in the body, lying dormant in the sensory ganglia. When the immune system declines; usually with age, the virus can reactive as Shingles.

Shingles is a painful and sometimes debilitating disease, that affects about 1 million Americans annually. Shingles occurs primarily in older adults, and the incidence increases with age. People 60 years and older are at the greatest risk of developing Shingles. Like chickenpox it is caused by VZV, and causes a blistering rash. The lesions resemble chickenpox. Unlike chickenpox lesions which itch, herpes zoster blisters are characterized by severe pain. They can appear anywhere on the body, but typically occur on the trunk, face, or forehead. The blisters tend be localized to one side of the body, and occur in a band. The lesions progress from macules, to vesicles, to pustules, and then to scabs. New lesions may appear for up to 5 days. It can take 2 to 4 weeks for Shingles to heal. Unlike Chickenpox, Shingles can’t be spread from person to person. However, shingles blisters do contain the varicella-zoster virus, and anyone who has not had chickenpox or been immunized against it, can develop Chickenpox from exposure to someone with Shingles.

Shingles occurs when the varicella-zoster virus from Chickenpox, reactivates. It is not known what exactly triggers the virus to reactive, but declining immunity associated with age is a major factor.

Shingles can also have complications. It can cause Opthalmic Zoster—which can lead to blindnessz—and other neurological complications.

Postherpetic Neuralgia and Other Complications of Shingles

Postherpetic Neuralgia is the most common Shingles complication, and causes long-lasting pain. The pain can last for months or years after shingles resolves. In addition to chronic pain, the skin may become ultra sensitive to light touch, such as, from clothing, slight breeze, or changes in temperature. The incidence of Postherpetic Neuralgia increases with age, and occurs in up to 15% of Shingles cases. As with Chickenpox, Shingles can be more severe in the immunocompromised, resulting in prolonged healing, and repeated outbreaks.

Shingles is  treated with oral antiviral medications such as, Aciclovir, Famciclovir, or Valaciclovir. These are partially effective, and lessen the duration and severity of the illness, particularly in combination with corticosteroids. However, oral antiviral treatment does not prevent Postherpetic Neuralgia.

Postherpetic Neuralgia can only be prevented by preventing Shingles from developing.

Before the introduction of the Varicella Vaccine most Americans had had chickenpox, and up to a quarter were estimated to develop Shingles.Shingles can be avoided by preventing chickenpox from developing in the first place.

Varicella Vaccine. Chickenpox is preventable through vaccination with the Varicella vaccine. The vaccine which was introduced in 1995, is now part of the scheduled immunization program for childhood diseases in the United States. A strain of the Varicella-Zoster virus was isolated from otherwise healthy children, who had Chickenpox, and attenuated in vitro through cell culture processes.

Varivax (Merck) and Varilix (GlaxoSmithKline) are single antigen vaccines, containing the live, attenuated virus. While Proquad (Merck) is a combination vaccine, that collectively contains inoculum against measles, mumps, rubella, and varicella. One dose of the Chickenpox vaccine is given subcutaneously to children 12 months to 12 years of age. Two doses are recommended for children 13 years of age and older.

The Varicella vaccine reduced the number of cases, hospital admissions, and deaths due to infection with Chickenpox, by more than 80% in children. It also conferred herd immunity to adults and infants, who were not themselves exposed or vaccinated.

Shingles Vaccine. The Shingles Vaccine is recommended for those who have had chickenpox, and are at risk for developing Shingles; adults 60 years of age or older in the United States (50 years or older in Europe). It is important to note that, people inoculated against chickenpox can still develop shingles, but have a lesser risk of doing so than those who acquired the varicella-zoster virus naturally. This is because the vaccine contains a live, but weakened version of the virus. If shingles occurs, it is often of a shorter duration and lesser severity.

Zostavax (Merck), the Shingles vaccine, contains the same live attenuated virus as the Varicella Vaccine for Chickenpoxc but it is more potent.The Shingles vaccine is not used for the prevention of chickenpox, and it does not cause Shingles.  It is designed for use in the prevention of Herpes Zoster (Shingles) and Postherpetic Neuralgia. By acting as a “boaster shot”, it continues the immunity conferred through previous infection with the virus.  Furthermore, people who have already had Shingles can still benefit from  the vaccine, as it will prevent Shingles from recurring.

The Shingles vaccine is generally safe, efficacious, and well tolerated. Adverse events reported were at the injection site (it is administered subcutaneously in the deltoid). It is important to note that, like with natural immunity ( from having chickenpox), protection via vaccination gradually wanes over time.

Contracting Chickenpox is not as benign as it may seem.  Though common and mild, it can have life-threatening complications, that can result in death. Chickenpox is a childhood disease, but it can negatively impact health in adulthood; as it predisposes you to developing Shingles.  The varicella-zoster virus responsible for the illness stays dormant within the nervous system, and reactivates later in life as Shingles. While Shingles in not necessarily life-threatening, the chronic pain that it causes can be debilitating and complicated by Postherpatic Neuralgia. Both Shingles and Postherpatic Neuralgia negatively impact personal and professional relationships, and there is no cure for Postherpatic Neuralgia. Vaccination against the virus early in life, drastically reduces the incidence of Chickenpox and Shingles, and preventing Shingles prevents Postherpetic Neuralgia. 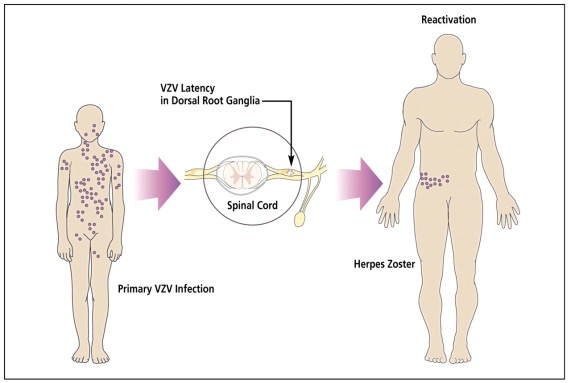