A twenty-one year old woman dies in California from “brain-eating” amoeba. A Minnesota teen boy is reported to have died also. Now the same “bugs” have been found in St. Bernard Parish water system in Louisiana. Is this an epidemic? They say it’s rare; if so then why is it so concerning, that its being screened for in some city water systems?

Should I be afraid?

It’s not an epidemic and it is rare, but the problem is it is deadly! The “bug” is small and can’t be seen by the naked eye and most don’t even know of its existence or danger. Also, it is not readily diagnosed because, the symptoms take a long time to show, and they mimic those of bacterial meningitis. By the time doctors even realize what they are dealing with, in most cases, it’s already too late.

What is it? The so-called “brain-eating” amoeba is properly known as Naegleria Fowleri (NF). It is a free-living amoeba; meaning it naturally occurs in warm waters  worldwide and is not due to some sort of contamination. Amoeba or single-celled eukaryotes (like the cells in our bodies) that can change their shape according to their environment. They can exist in an active motile form or an immobile cyst from (hibernation).  NF feed on organic matter, and are found in hot springs, resort spas, swimming pools, lakes, streams, ponds, fresh water, and brackish water. They are also found in polluted water and sewage, but again, there does not need to be any source of contamination for these amoeba to be present.

What does it do? It was first identified in 1965  in Australia, where there were 4 fatal cases. Prior to this, amoeba were considered nonpathogenic; meaning they were not thought to cause disease. However, Naegleria Fowleri do cause a fatal illness known as Primary Amoebic Meningoencephalitis (PAM). The disease causes severe inflammation of the central nervous system(CNS) which  then leads to necrotizing and hemorrhagic meningoencephalitis. Essentially, the amoeba gain entry through the nose, penetrate the mucosal lining of your nasal cavity, migrate via the olfactory nerves, and disseminate into other areas of the CNS. There the amoeba trigger your immune system causing inflammation, they then form sucker-like appendages known as amoebastomes, thereby eating and destroying brain tissue. 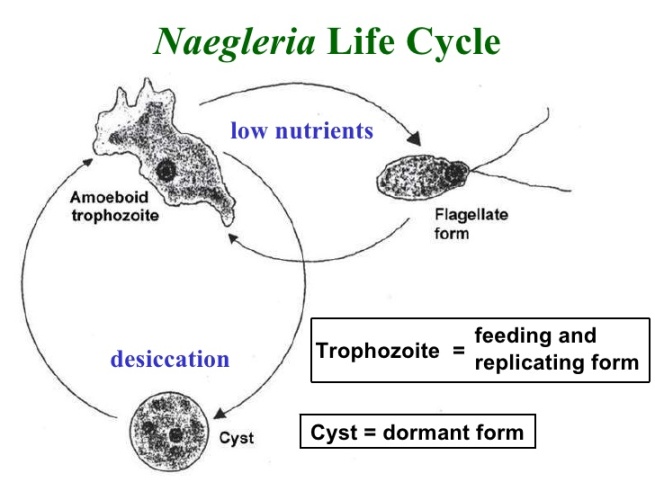 Signs and Symptoms of PAM

The signs and symptoms of PAM take a while to show up after infection. There is a 2-5 day incubation period where you may feel perfectly fine. An initial sign is a headache that occurs in the front of your head that does not respond to painkillers.  Early symptoms include, a fever ranging from 100 to 106 degrees Fahrenheit, altered taste and smell associated with rhinitis (inflammation of the nose and nasal cavity), vomiting, seizures, lethargy, and sometimes sensitivity to light (photophobia). In the later stages, pressure continues to build around the brain due to the inflammation, and compression of the brainstem and cerebral ataxia occur. Death ensues within 3 to 7 days after the onset of initial symptoms.

There is no set regimen, but based on the few people who have survived, treatment is typically 10 days and consists primarily of the antifungal, Amphotericin B, given intravenously. This  may be in conjunction with rifampin – a antibacterial drug-given orally,  or miconazole, which is another antifungal that has a synergistic affect with Amphotericin B (it boosts its ability to kill the pathogen).

Summertime is usually when cases of this disease surface. Waters warm with the increasing temperatures and people begin to swim in pools, lakes, ponds, and rivers. As a result, children and young adults are most often affected by this amoeba. You do not have to be sick to be susceptible to infection either; the amoeba infects healthy persons. However, there is no reason not to go swimming as the disease is rare, but you should be aware of the temperature of the water. Diving and jumping into water increases the chance of water being forced into your nose, so one should avoid these practices or wear a nose plug. In addition it is not contagious from person-to-person.

One thought on “What’s Eating at the Lake?”

Scientist by practice and birth. Professionally trained toxicologist and researcher. Currently a Doctoral candidate in the study of Pharmaceutical Science, I also hold a B.S. and M.S. in Toxicology.